I just love epic unique things and as such, ThinkPads kinda qualify so I ended up with a collection of ThinkPads, they started to pile up in my room. Let’s do something with them!

The device itself, or how to find a victim

Recently, I revived my old T41 but this device is 8 years old and slow. So I needed something to fancy it up and after I saw that the Chaos Computer Club Munich got a laser cutter, I immediately knew what I wanted to do:

Etch some things into the cover!

Apparently, I am not the first one with this idea. So we got this 40W CO₂ laser and the fine folks at RaumZeitLabor already tested it with ThinkPads. Beware: The R-Series has a different shell material which apparently produces Hydrogen cyanide. But the X40 was apparently fine and as far as I know the T and X series use the same materials, so my T41 should be safe (as in: it won’t kill us on the spot).

I started by gathering logos of (mostly) Free Software projects that I like and that have a pretty logo, in SVG format. Wikipedia is immensely helpful, because the only Clojure did not have a proper SVG. For other logos, I searched the web and found the logo of the Mozilla Foundation, The Pirate Bay and Octocat of GitHub fame. For the etching, you have to keep in mind that the laser only supports black and white (at least ours, maybe other more sophisticated support dithering to display shades of grey). So crach open Inkscape and edit the logos at will. Everything white will be left un-etched, everything black will be etched, so you’ll have a kind-of negative of your logo.

The process, or how to not die

After creating the SVGs, we needed to feed them into the engraving software. This strange thing emulates a printer driver, so you can export from any application that supports printing, like Inkscape. The only other “sensible” format it supports is XPS (can be created using the Windows XPS printer driver and worked slightly better in our case). I don’t think I have to mention that it is Windows-only, but running it in VirtualBox and communicating via USB works really good.

(Click on the links, I made some short videos of the etching)

You insert the laptop, put the laser into the top right corner of the ething area, focus the laser and off we go. Depending on the power it can look quite fascinating, with sparks and burning (40% power). In my option, the optimum is around 30% power as in the three logos in the corner.

And then, sometimes catastrophic failures happen. After we started, the carriage with the laser started hitting the border of the laser area, therefore my Octocat is split in two because the carriage was moved in mid-etch. I think the software should detect that you’ll laser an area that is outside of the reach of the carriage, but oh well.

The not-dying-part? Yes. Keep good ventilation. With 20% power the smell was ok, with 30% it was annoying. With 40% it burned quite deep and the burnt shell made the whole room smell awful (and probably the fumes are not healthy). We redirected the fumes with proper ventilation to the outside in the first place but our laser is not airtight. We should improve this someday.

A picture is worth 10K words - but only those to describe the picture. Hardly
any sets of 10K words can be adequately described with pictures. 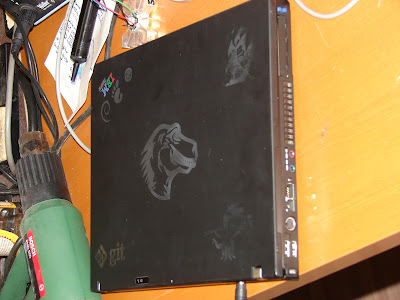 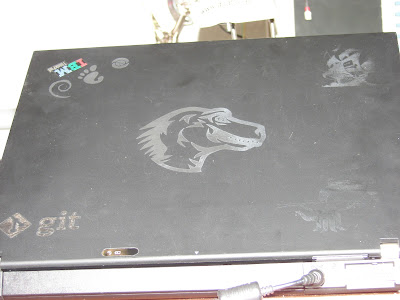 More pictures and in higher resolution my album. Feel free to follow/share.

Overall, I am still really impressed and I think my new old ThinkPad is pretty awesome now. It was about 15 minutes of laser etching (the club charges per minute) so it cost me 15€ overall and some 4 hours of work.